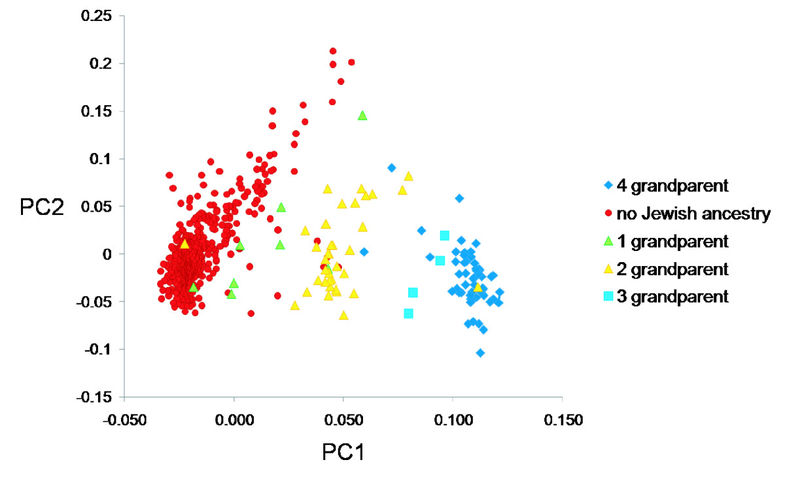 This post is part of a series examining figures from population genetics papers which are modified into white nationalist memes. See here for a brief overview of the project.

Here is a PCA plot from Need et al., Genome Biol, 2009, examining the population structure of a sample of individuals with self-reported Jewish ancestry. As indicated in the legend, points have been colored to indicate how many of each individual’s grandparents were Jewish:

Now compare this to the following modified figure, where the legend has been replaced by annotations near each cluster of points, but instead of stating the number of grandparents, clusters are identified as “Gentiles,” “Quadroon-Jews,” “Half-Jews,” “Almost Jews,” and “Full Jews”: 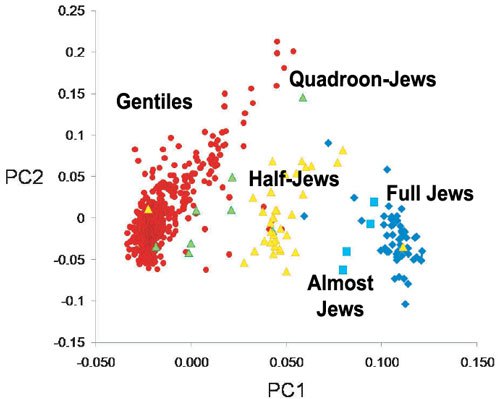 Tweaking the legends of figures for clarity is commonplace among scientists when giving talks, but what’s so hard to understand about having 0, 1, 2, 3, or 4 grandparents of a particular ethnicity? What does the term “Quadroon-Jews” tell us that “Individuals with 1 Jewish Grandparent” does not? Let’s dig a little deeper.

Representing one’s ancestry in terms of fractional contributions is known as hypodescent. Hypodescent is often a benign way for us to talk about our own cultural roots and identity. We do this when we get our 23andMe results–I still haven’t hopped on that wagon, but based on the geographic ancestry of my own grandparents, I might say that I am “half Swedish” or “a quarter Scottish.” My perceived hypodescent gives me an excuse to hog the potato sausage and pepparkakor at Christmas, despite the fact that I cannot speak Swedish, have never lived in Sweden, and can’t sing the Swedish National Anthem. Nevertheless, my great-grandparents hail from a small town north of Stockholm, and therefore I am entitled to universal healthcare and a proclivity for Swedish pancakes, or something like that. Genetics ain’t culture, and vice versa, but we don’t always make that distinction when talking about our cultural and/or genetic ancestry in day-to-day conversations.

So what’s the harm in infusing a figure with some innocent hypodescent terminology, if it’s something we all understand? Well, hypodescent also has an ugly side, and is one of the major mechanisms of structural racism in society. As defined by Steve Riley, hypodescent is “the practice of determining the classification of a child of mixed-race ancestry by assigning the child the race of his or her more socially subordinate parent.” Hypodescent is the reason why children of slaves who were raped by white slaveowners were still classified as property, since the laws stipulated that you are only as high on the social ladder as the lowest of your parents. Hypodescent was the basis of “one-drop” anti-miscegnation laws during the Jim Crow era, which prevented interracial marriages if one partner had any black ancestry. Hypodescent is the reason why white nationalists are obsessed with establishing their “racial purity” using genetic ancestry tests. In these contexts, hypodescent is more than just a cute little pie chart showing where you ancestors lived, but a means of establishing and enforcing a racial hierarchy throughout society.

This brings us back to the modified figure: why does it fall into the “structural racism” category of hypodescent and not the “23andMe” category?

Like all modified figures I have documented, this one attempts to frame population genetics research as supportive of “scientific racism,” but does so by modifying the language rather than re-interpreting the results in a biased manner.

Let’s unpack the problematic language here, specifically the term “Quadroon-Jews.” In racially-segregated societies, individuals with mixed backgrounds are often differentiated with a formal term (e.g., members of the Mestizo caste in colonial Mexico were the chlidren of Spanish colonizers and native populations). The term “quadroon” was a formal racial classification based on hypodescent, referring strictly to individuals with one quarter African ancestry. “Quadroon” is unique to this context, and most certainly not a colloquialism for 1/4 of any given ancestry. Thus, the term “Quadroon-Jews” used in the modified figure is almost nonsensical, equivalent to saying “Mestizo-Hindu” or “Quadroon-Swedes.”

“Quadroon” and other antiquated classifications of African ancestry in post-colonization America (e.g., “octaroon,” referring to individuals with 1/8 African ancestry) would be described as archaic at best. As stated by Nick Douglas, “[the labels ‘quadroon’ and ‘octaroon’] perpetuate the idea that whiteness is the ideal state of the human race, by having denominations of whiteness as a racial standard.” So “Quadroon-Jews” is simultaneously a) nonsensical, and b) a racial slur.

This comes full circle when we consider another tidbit of hypodescent history: the Nuremberg laws of Nazi Germany, which institutionalized anti-Semitism and set the stage for the Holocaust, were directly inspired by Jim Crow laws in the US. As the genetics community was frustratingly reminded earlier this month, racism against Jews and African-Americans are often two sides of the same coin. More generally, racial epithets specific to one minority are often mutated and co-opted to target other minorities, casting some light on the likely intent of this modified figure.

Who is using this figure?

It should come as no surprise that this modified figure is featured on virulently anti-Semitic white supremacist websites, including National Vanguard, Stormfront, and David Duke’s personal site. 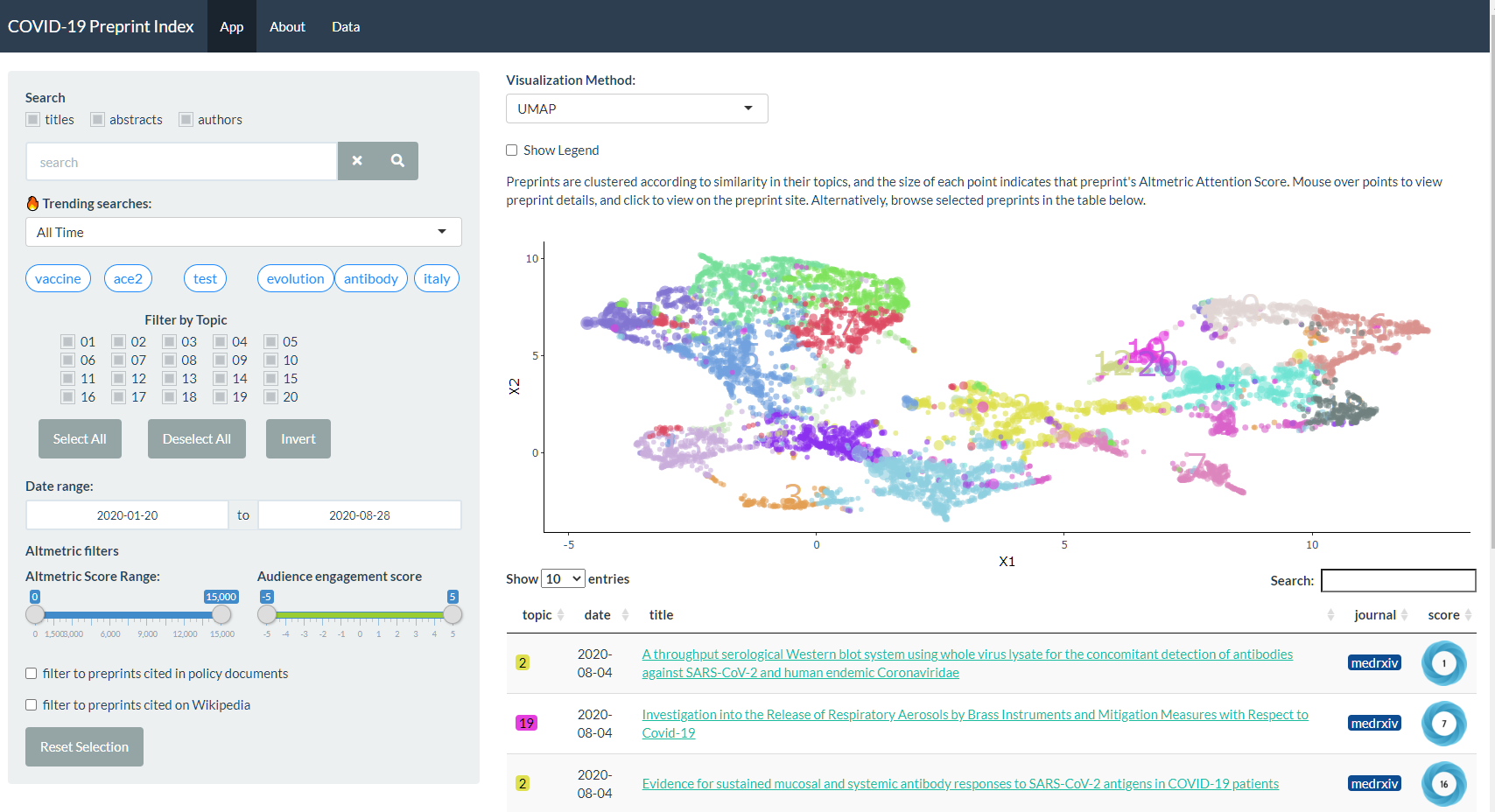 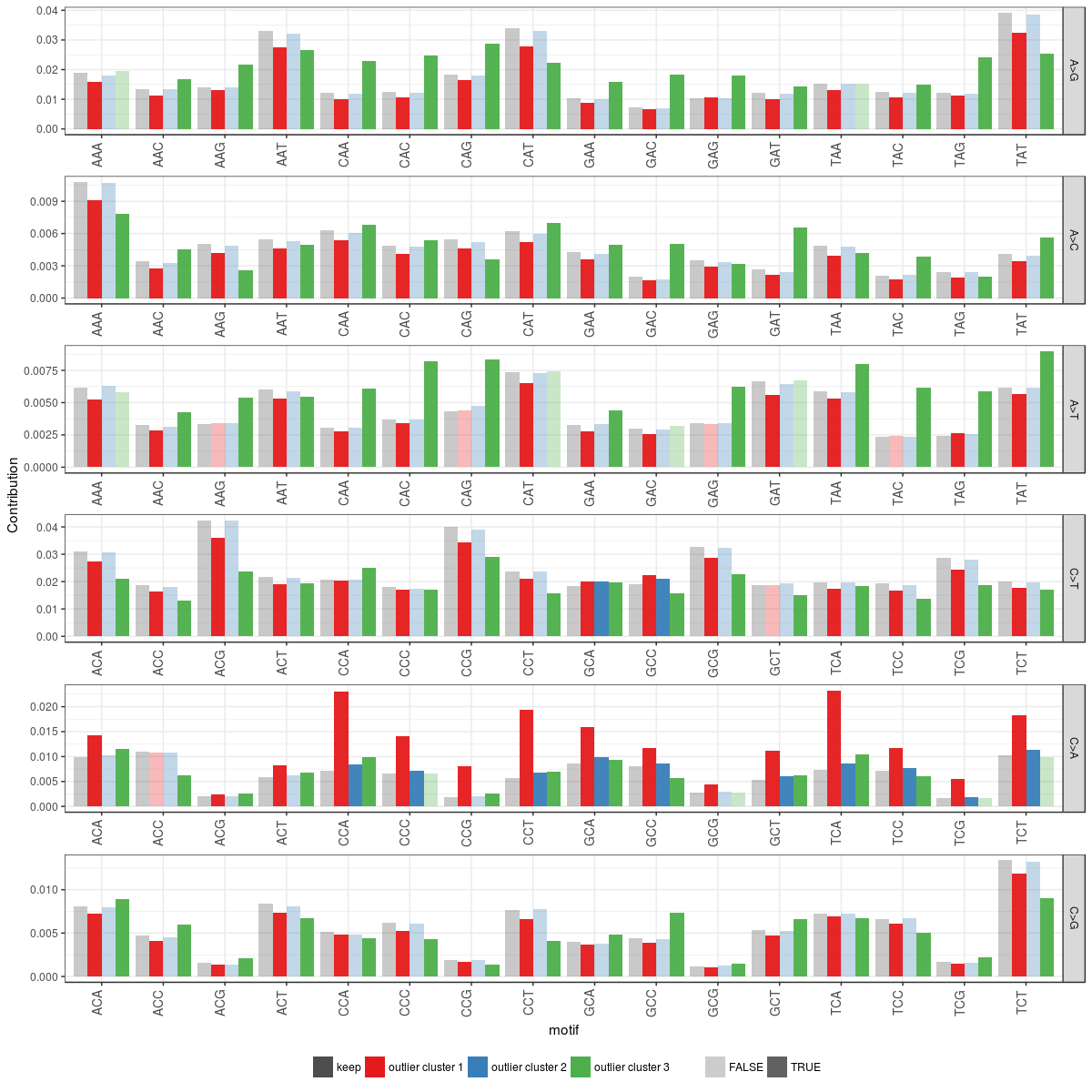 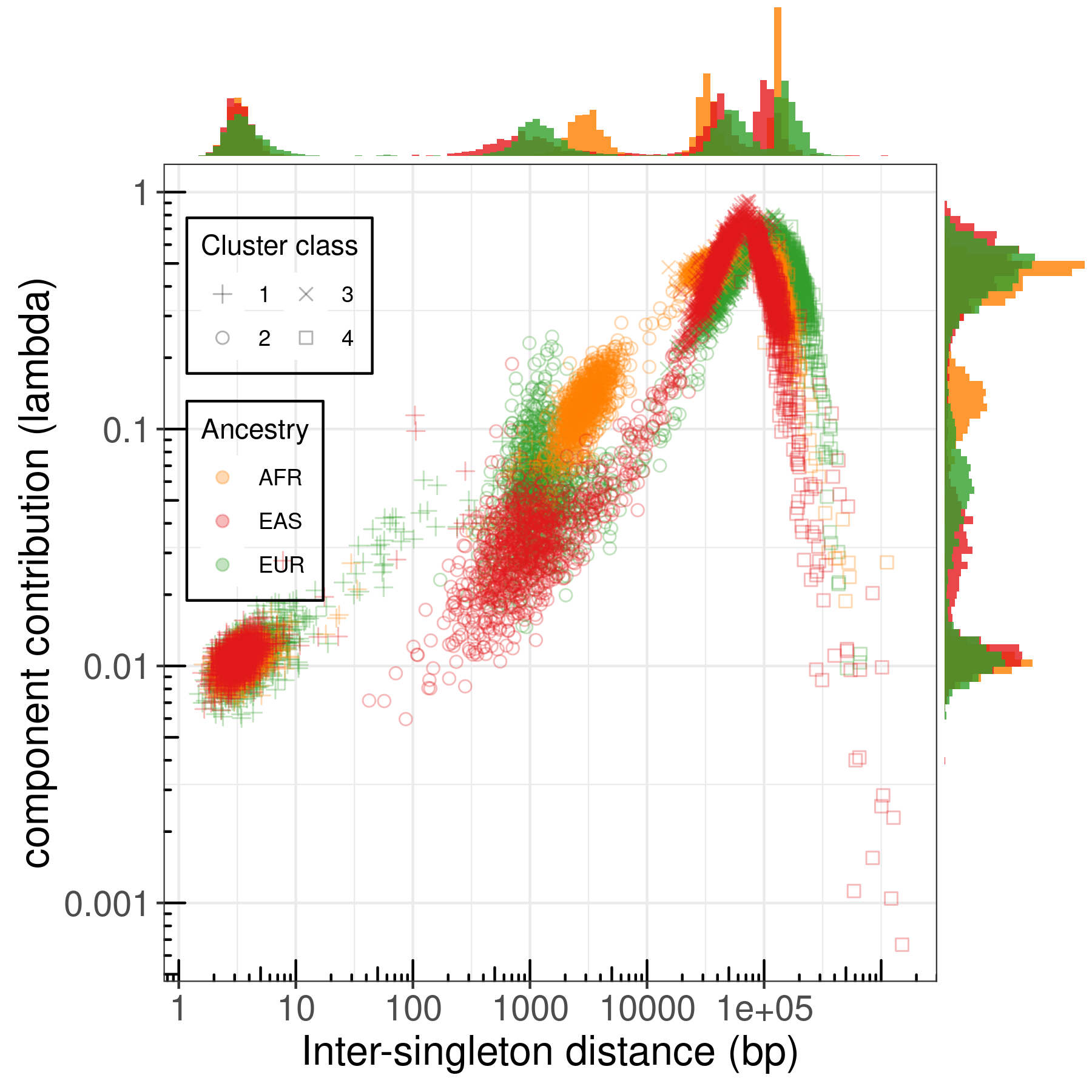